Today, I learned about:

While we normally celebrate the birthday of a person who is no longer with us, be they famous or not, there are also some examples of when the day that person left us for good is also remembered. In Sweden, there are particularly two such events, November 6, 1632 when the Swedish king Gustavus Adolphus (Gustav II Adolf) was killed in a battle close to Lützen during the 30-year religious war in continental Europe. Since he had founded the city of Gothenburg (Göteborg) 11 years earlier, on this day every year there are special pastries with his portrait on them. See also references #1 and #2 below.

Another such event happened on December 10, 1895 when the Swedish inventor and entrepreneur Alfred Nobel died, after that he earlier had made a will to donate a large sum of money to fund a prize to be given yearly to famous scientists. And so, on every December 10, starting 1901, with few interruptions due to conflicts, there have been the traditional hand-out of the Nobel Prize in five different catagories, expanded to six in 1968. And during the last two years, the prize giving ceremony has been decentralized due to the ongoing pandemic. See also reference #3 below.

Nowadays, there are also many complementary activities to the Nobel Prize. One such is a lecture given by one of the Nobel laurates in a way so that also non-scholars can follow along and appreciate it. This year, on December 8, 2021, the Physics laureate in 2006, George Smoot, talked about the Future of Space travel, and in it were some really fresh examples (updated the very same day) of what has been going during 2021. Really interesting! I had hoped to be able to publish a link to the lecture, but unfortunately it seems that it is not available any more. I talked to the organizers and they informed me that they had to remove the link due to copyright issues. However, in reference #4 below is a link to another event held in Gothenburg yesterday, called The City of the Future, organized by the Nobel Week Dialogue 2021. Enjoy!

That’s what I learned in school today!

The United Arab Emirates, especially through the emirate Dubai, continues to expands its offerings for tourism in this interesting part of the world. In my post of 2016-06-21, I wrote about the technological advances in Dubai, and now I learned that further to the earlier 16 languages, their Ministry of Tourism has now also added Swedish as a language to a complete subsite, see reference # 1 below. The photo below, courtesy of my friend Chiara Anzalone, shows the Arabian Gulf at Dubai, with Burj Al Arab Jumeirah, considered the world’s must luxurious hotel in the foreground, and the artificial Palm Jumeirah islands towards the horizon. How about meeting me there? 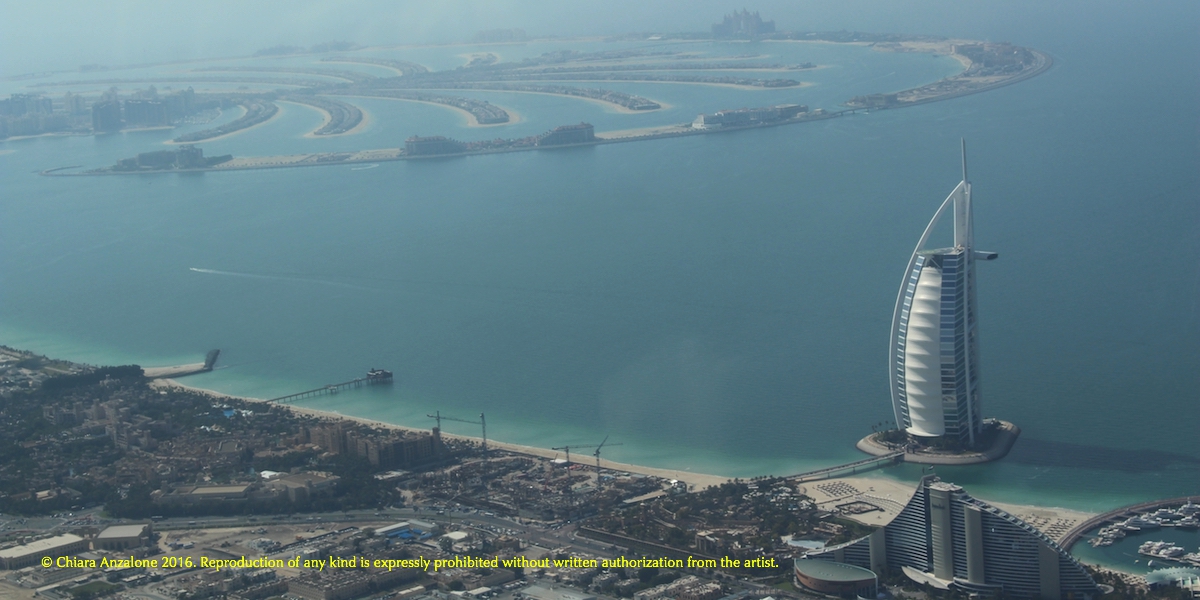 Photo from Dubai, taken by Chiara Anzalone, showing the Arabian Gulf, with Burj Al Arab Jumeirah, considered the world’s must luxurious hotel in the foreground, and the Palm Jumeirah islands towards the horizon.

The past week revealed the laureates of the scientific Nobel Prizes 2016, where among other things we learned that the term ‘topology’ means totally different things in physics and chemistry. Radio Sweden made a fantastic job to compress the reasons for awarding exactly these scientists into three 1-minute video clips. References #2, #3, #4 below carry the links. The language is Swedish, but who knows besides learning more about medicine, physics, and chemistry, you may also pick up some words in the “language of honor and heroes”?

I had planned to discuss the advancement of machines into our lives today, but since it is a subject that cannot be dealt with on a coffee break, I will return to it any day soon. Instead, I would like to show how one of the world’s technology giants are once more dismantling their acquired heritage. The company is called Microsoft, and after turning Nokia and Skype into dust, now it seems that LinkedIn will be their next victim. I received this e-mail the other day: 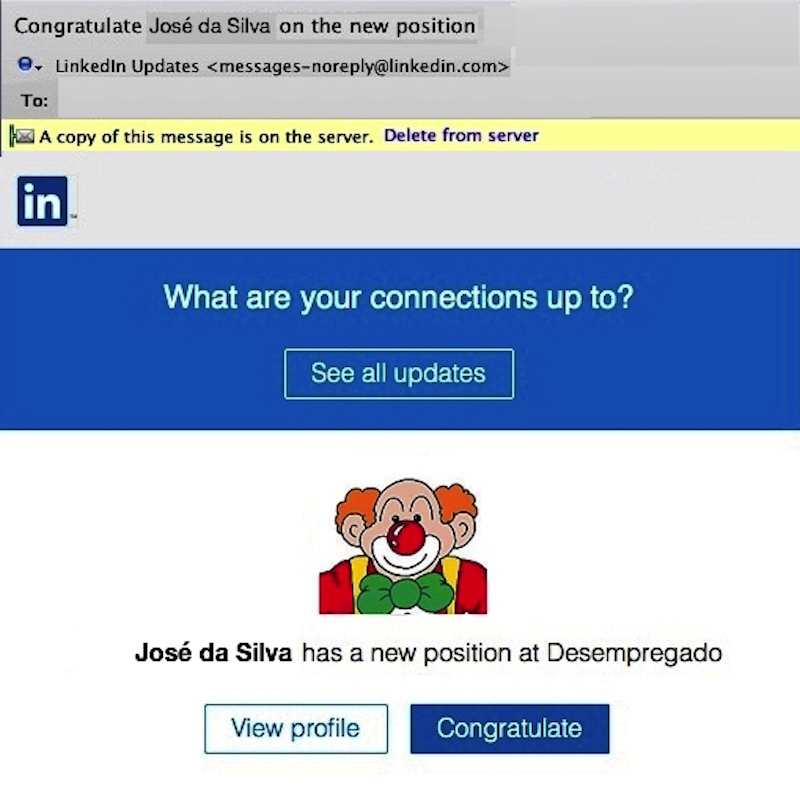 The once excellent social business network LinkedIn was recently bought by Microsoft. Looking at this network update, how they want me to congratulate a friend who recently got unemployed (“Desempregado”) is just one more sign of their continuing “King Midas in reverse”. (Name and image have been altered for security reasons.) See and listen also to reference # 5 below.

And, there is one more thing … 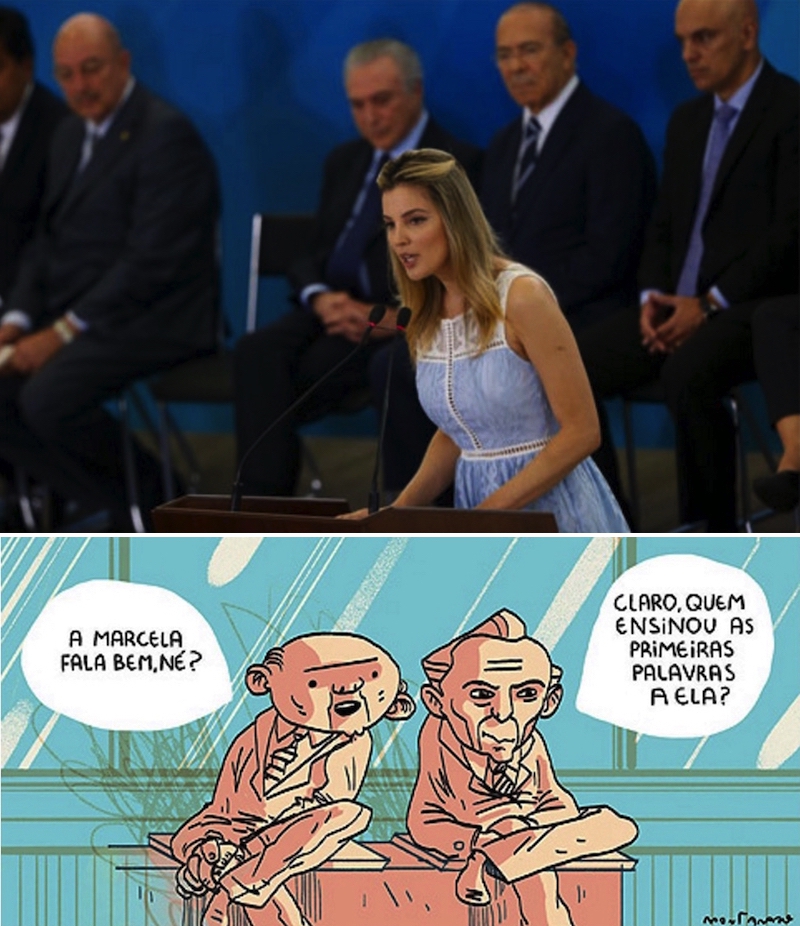 Brazil’s First Lady, Marcela Temer, presents the new social program Criança feliz (“Happy child”), with her husband, president Michel Temer, behind her, on 2016-10-05, photo by Pedro Ladeira/Folhapress. The same newspaper, Folha de S. Paulo, published today 2016-10-08 a cartoon by Montanaro, in which an admirer says “My, does Marcela speak well!” and Michel responds “Of course, who do you think taught her to speak her first words?” (This kind of political gossip is common due to the large age difference between the two, 76 vs. 33 years.)

5: The Hollies “King Midas In Reverse”