Even if you loose your voice, there are now ever better means of communicating with other people. Of course you can write, if you are able, but you must agree with me that an audio is much easier to grasp than a text, one can continue with most other activities and still understand what is being said. (But take very much care, even if you use a handsfree mobile phone in your car, your attention to the ongoing call is often so high that you can be a menace to other drivers, cyclists, and pedestrians.)

Yesterday, I watched the 2014 movie about Stephen Hawking and his first wife Jane, “The Theory of Everything”. In the very moment when Stephen is first heard through his mechanical voice, Jane is pretty excited, but complains that the voice has an American accent. If that had happened today, the genius, who recently celebrated his 75th anniversary, could use his own voice, although generated artificially. More about the movie and Stephen Hawking can be found in references #1 and 2 below.

And now over to the story about Jason Liversidge and his new voice: Just like Stephen Hawking, Jason, who lives in Yorkshire in northeast England, suffers from the neurological disease called ALS. The first symptoms appeared almost 10 years ago, but it was only three years ago that he got the diagnosis of ALS. His own voice is still working, but sometimes he needs a backup voice, and then he can use his computer which generates sounds with the same accent as Jason’s, “not the posh English accent”. His artificial voice was created from a video recording of a speech he made some years ago, combined with speech from other men from Yorkshire. A research institute in Edinburgh, Scotland, were then able to recreate Jason’s voice synthetically. The proper Jason and his family recognize the similarity of both voices. Reference #3 appoints to the radio program from Radio Sweden (in Swedish) which tells the whole story.

Jason Liversidge from Yorkshire already has a sounds-alike backup to his voice when his own does not perform as desired. Photo by Stephanie Zakrisson/Sveriges Radio.

Exactly one year ago, 2016-03-12, I published a video showing Atlas, a robot from Boston Dynamics performing gracious movements. But it did not stop there, look at this video of its newest sibling, Handle, in reference # 4 below, SIMPLY AMAZING!

Ponte da Amizade (“Bridge of Friendship”) joining Foz do Iguaçu – PR, Brazil, where the photo was taken on 2017-01-26 by my daughter, with Ciudad del Este, Paraguay, in the left side.

The photo above shows another view of the Paraná River, this time from the Brazilian side, shot 200 km South of the photo from 2016-11-30. It shows the bridge interconnecting the Brazilian city of Foz do Iguaçu – PR, to the right, and the Paraguayan city of Ciudad del Este. Not long ago, this bridge used to be packed with people and cars returning to Brazil from a shopping spree in Paraguay, but the ongoing financial crisis has also here had a devasting effect. (I already published a photo from Foz do Iguaçu on 2016-01-28).

Refs.:
1: The Theory of Everything

Recently, a big scandal was uncovered in Sweden, at the prestigious Karolinska Institutet, that every year indicates the laureate of the Nobel prize in Physiology or Medicine. A world famous surgeon, Paolo Macchiarini, was hired as a visiting professor of Regenerative Medicine in 2010. He had developed a method of replacing a patient’s defective trachea with a new one made of plastic, which had been completed by the patients’ own stem cells to regenerate a fully compatible organ.

Between 2011 and 2013, Macchiarini performed three surgeries in Stockholm, as well as five more in USA and Russia. However, six of those surgeries ended up with the patients dying, and thus no such surgery was executed. Instead, in 2014 started investigations accusing Macchiarini of research fraud and unethical behaviour. One of the objections was that the alleged integration of the patient’s own cells with the synthetic trachea never happened. More in this matter will surely be announced soon.

However, I just came across an example of where synthetic organs seem to be a good and viable choice. Yesterday, Engadget published sensational information that the doctors at the Wake Forest Institute for Regenerative Medicine in Winston-Salem, North Carolina, United States, had successfully used a special 3D printer to produce a realistically looking human-size ear. The material used is a “biodegradable, plastic-like material” to form the shape of tissues, as well as water-based ink to hold cells and a series of microchannels to allow oxygen and nutrients to flow through. Look at the following amazing picture, soon to be found on a human being somewhere in the world: 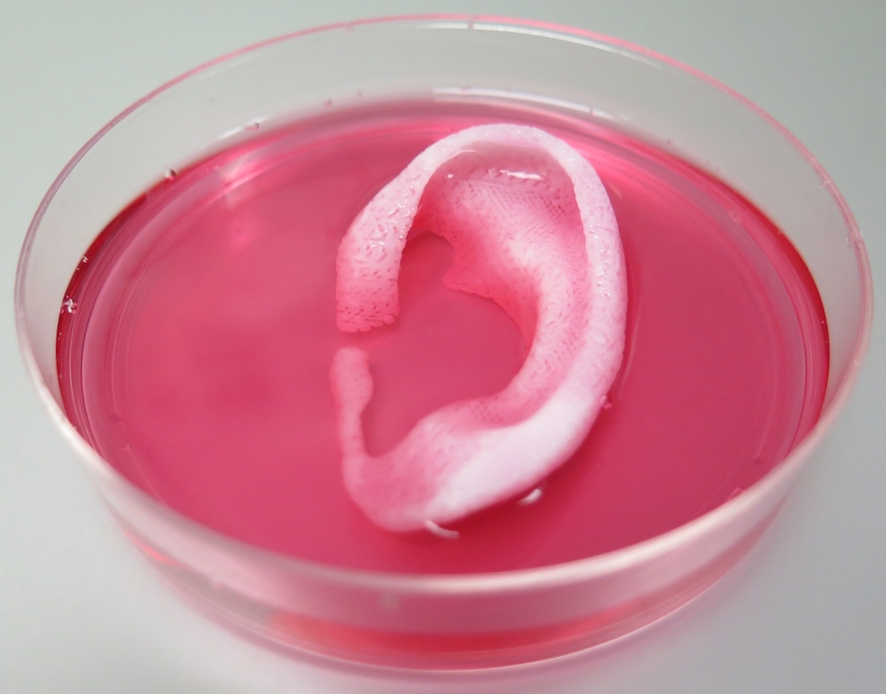