The older one gets, the faster time seems to pass! Lately, that has been more true than ever, but exactly one month ago I discovered the time machine:

My family had travelled to the city of Umuarama in the southwest corner of the Brazilian state of Paraná, where my son, a scholar in IT, would present a paper at an international congress about recent progress in various fields of development and sustainability. Since Umuarama is located only one hour drive from the border with Paraguay, we decided to go there and do some advance Christmas shopping.

It was then that we took the time machine twice, back and forth, in the afternoon of Friday 2016-10-28. When we left the state of Paraná, local time was 14:00 DST. We took the almost 4 km long bridge over Rio Paraná to its right side, in the Brazilian state of Mato Grosso do Sul, in a different time zone, and arrived there at 13:03 DST. Then, we travelled on and crossed the border between Brazil and Paraguay some 5 minutes later, and when we did so the local time in Paraguay was suddenly 12:08! So, in less than 10 minutes by car, we had travelled back 2 hours in time! Is that not a fantastic time machine? 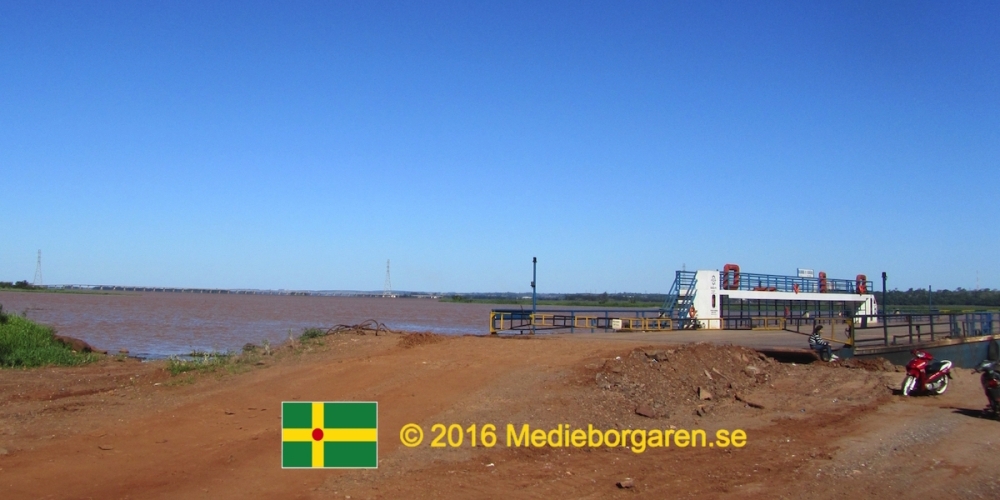 Look at the photo above, I took it when we planned of going back by ferry to Brazil after our shopping spree. It was taken from the landing of the ferry boat in Salto del Guairá, Paraguay. Unfortunately, that day the ferry was grounded for maintenance, so we had to take the highway back again. In the horizon is Ponte Ayrton Senna, a bridge connecting Novo Mundo, Mato Grosso do Sul, Brazil with Guaíra, Paraná, Brazil. At this Paraguayan location the local time is 15:00, in Mato Grosso do Sul it is 16:00 DST and in Paraná it is 17:00 DST. The distance from the border between Paraguay and Brazil to the shores of Guaíra is 10 km, meaning that going by car in less than 10 minutes we experienced the time in three different time zones, for the second time that day.

I think that this fact should enter the Guinness Book of Records as being the fastest event of experiencing three different time zones!

And if you read this post on November 30, then there is still time to participate in an interesting experiment, the BIG Bell test. Reference #1 below speaks about how 30 000 scientists will try to discover if the entanglement theory is true, i.e. if measuring one electric particle will affect another particle far away. Einstein did not believe in it, so why should we?

Reference #2 below gives all the details to permit you to participate. Good hunting!