Amidst all depressing news about threats of terrorist attacks, the 30-year anniversary of the Chernobyl nuclear accident and its consequences, at least one ray of sunshine found its way to me today.

I just learned that researchers at the University of California in Irvine have developed a new kind of battery. In comparison with the ruling lithium ion batteries, which use a liquid electrolyte, the new battery is composed of various strands of nano wires in a gel electrolyte. Preliminary results have shown that it may be possible to recharge this new battery hundreds of thousands of cycles with no or just a small degree of degrading in its charging capacity, as opposed to the lithium ion batteries which normally lose much of their powers already after some thousand cycles. However, there is no word yet of when we might eventually see these nano wire batteries as commercial products. 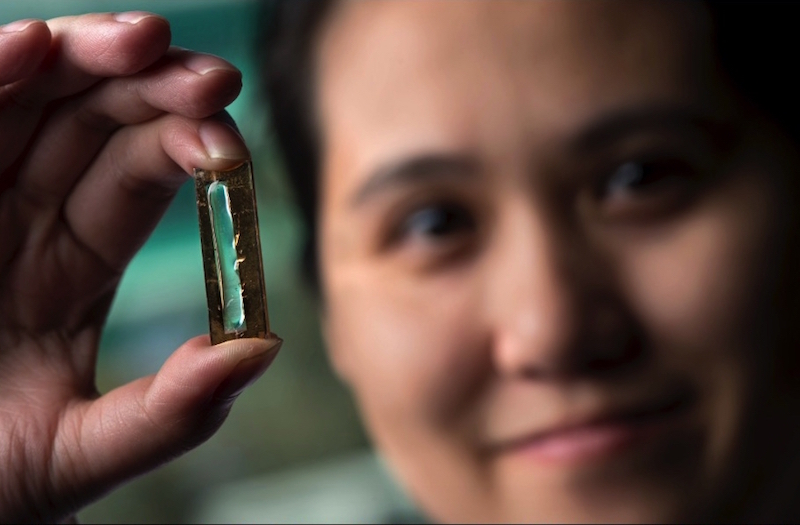 Is this the battery of the future? The researcher Mya Le Thai at the University of California in Irvine (UCI) shows us the promising object we all might crave for in a not too distant future. Photo by Steve Zylius, also from UCI.

References #1 and 2 below are brief articles about the new type of battery, and reference #3 is the scientific paper which was recently published.

But until we see those new batteries in production, we have to make use of what we have to the best of our knowledge. And then it can be good to verify what Android Authority wrote in their article about 6 common battery myths, reference #4 below. Read it and take lessons from it!

1: New Nanowire Batteries Can Be Charged More Than 100,000 Times

3: 100k Cycles and Beyond: Extraordinary Cycle Stability for MnO2 Nanowires Imparted by a Gel Electrolyte

Everyone involved in paying the electricity bill knows well how it is determined. For many years, the standard unit used has been kWh, an abbreviation of kiloWatthours. Let us have a look at what this means.

Take all your electro-electronic devices and appliances and one by one, do the following:
– Look at the label on the device that informs of its electric power consumption, e.g. the refrigerator may be 80 W, the television set 100 W, etc.
– For each one of those devices consider how many hours you are using them during the month. Since the refrigerator is on all the time, it therefore generates an energy consumption of 30 x 24 x 80 Wh = 57 600 Wh = 57,6 kW. You watch TV on average during 4 hours per day, so it contributes with 30 x 4 x 100 Wh = 12 000 Wh = 12 kWh, etc.
– Sum all of those individual devices and you will get the total energy consumption during one month, and thus you have a good idea if the amount of the electricity bill seems reasonable or not.

Provided you have the money to pay the bill, you can consider the electricity grid a source of energy supply that never ends, of course restricted to the internal cabling, the capacity of the fuses, etc. But when you deal with portable devices, then you are disconnected from the grid and need to rely on the battery in the device, which nowadays is mostly of the rechargeable type.

Let us now look at one device, the one that most people cannot even think about living without, the mobile phone. Do you know how they are specified energywise? The most common way is considering the maximum capacity of its battery, that is how much energy you should be able to squeeze out of the battery, if it is brand new and totally charged. Smaller smartphones typically use a battery in the range of 2 000 mAh, bigger ones somewhere in the 3 000 mAh region. So comparing the battery capacity of the different phones you are thinking about buying may be one important decisive factor.

However, I just learned that there is another means of measuring how potent the battery is, namely considering the Wh you can squeeze out of the battery. Ohm’s Law tell us that power (measured in watt, W) is the result of multiplying the electrical tension, colloquially named “voltage”, (measured in volt, V) and the electrical current, “amperage” (measured in ampere, A). So from this you can understand that if the operating tension in the phone is the same among the phones you are comparing, then of course you can get a higher total current, and consequently usage time, out of a phone with a higher battery capacity. But what if you could obtain the same operational results from a phone which main processor works at a lower tension? Evidently, from an energy point of view, the same total battery capacity would guarantee a longer time of usage! Something to think about. See also the following photo from an alleged test setup for the upcoming Apple iPhone 7 and the complete article in reference #1 below.

Citation from an article on macrumors.com, discussing the upcoming iPhone 7: “An image of the battery said to be for the iPhone 7 has surfaced, listing a capacity of 7.04 watt-hours. That’s slightly larger than the equivalent battery capacity listed for the iPhone 6s (6.61 watt-hours) and almost identical to the iPhone 6 (7.01 watt-hours). Voltage is not visible on the alleged iPhone 7 battery, so the exact charge capacity is not yet available, but should be similar to the iPhone 6 battery.”

Above, I mentioned an article in Portuguese describing the dangers of using lithium-ion batteries of low quality. Luckily for those who do not understand Portuguese, reference #2 contains the original article, published in the New York Times.

And in the same spirit as the article above, I suggest that you read also the article in reference #3. It deals with a project for importing cheap hoverboards from China and reselling them in USA, written by a person from the reputable site TechCrunch. Yet another interesting read, if you ever had a desire to do something similar.

The hoverboard that Khaled “Tito” Hamze imported and resold in USA

2: The risks in hoverboards and other lithium-ion gadgets

3: How I built a hoverboard company and then blew it up