Winter in the Northern hemisphere is supposed to be filled with snow, so that people can enjoy the great outdoors making snowmen, having a snowball fight and of course bring out their skis for some exciting tournaments.

But the way we treat Mother Earth, sometimes she responds that we have to make our own snow. And that has happened again this year. Last Thursday, February 11, for the first in three years, there would be one more cross-country ski, in the sprint modality, arranged in the vicinity of the Royal Castle in Stockholm, Sweden. Well, the competition only occurred due to the hugh efforts of bringing in snow from far away and laying it on the ground for the athletes to compete.

The Swedish ski star Stina Nilsson in action during a qualification heat for the Royal Castle Sprint in Stockholm. Photos by Bildbyrån

And once more, it was the Norwegians that got most of the medals, both in the men’s and the women’s race, two out of three in each discipline. The Russian athlete Nikita Kriukov was the fastest among the male sprinters and Maiken Falla from Norway won the female race. The Swedish star Stina Nilsson, who headed the World Cup sprint table before the race, ended up with the bronze medal after yet another dispute about what is fair or not when trying to defeat a contender. 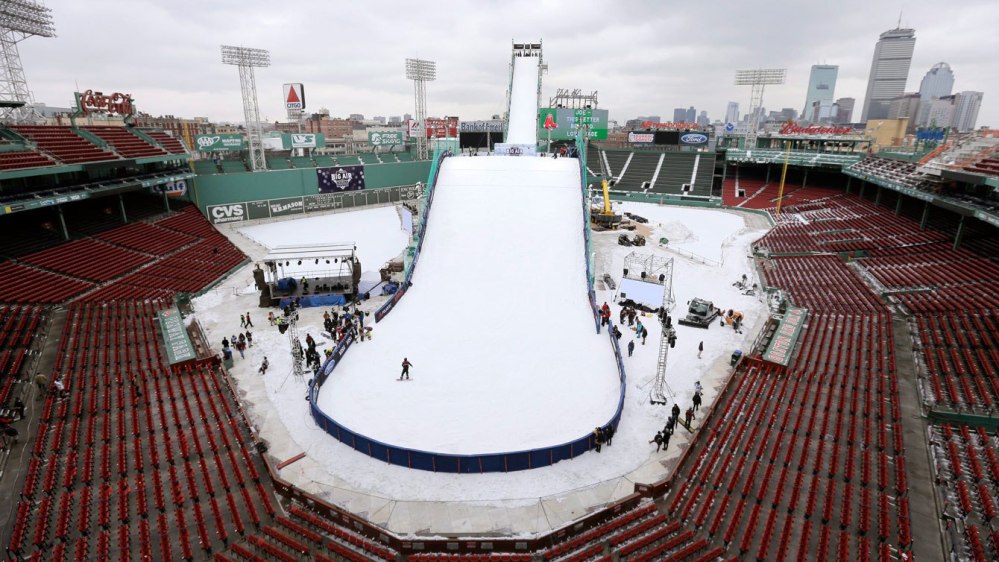 Fenway Park set up for the FIS snowboard and ski big air events on February 11, 2016. Photo copyright by the Canadian Olympic Committee

On the other side of the Atlantic Ocean, in Boston, MA, USA, there was another set of World Cup events on Thursday and Friday, Snowboarding and Big Air, respectively. Also here the setting was quite uncommon, inside of Boston Red Sox Stadium Fenley Park, where a 43 m tall scaffold ramp had been set up with all the snow to go with it. References 3 and 4 below give complete coverage of the events.