Many countries around the world is today commemorating the International Women’s Day, and of course I participate in congratulating all those women who make our lives worth living. I understand that there places, including my home country Sweden, where the women do not believe that there is a need for such a day, argumenting that there is no special day for the men. Well, they are correct, of course, but only in part! In fact, we men have 364 days (even 365 days this year) we can call special days for men, so we cannot complain. Girls, I beg you, please acknowledge your day and do not leave us in the dark! 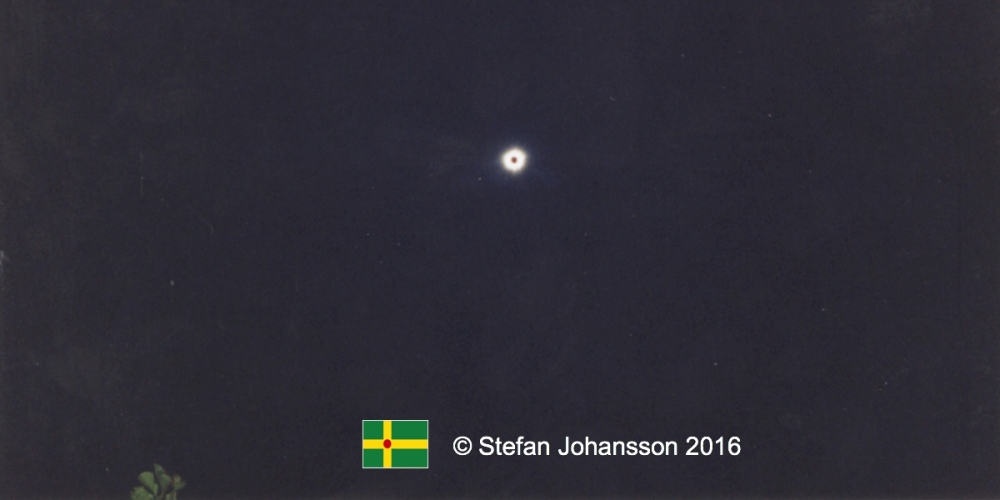 Speaking about being left in the dark, the photo above shows just that situation. I took it in Salzburg, Austria, on 1999-08-11 when there was a total solar eclipse against a complete clear sky! I was there with my family and still in the very morning of that day, we were worried that an abundant volume of clouds would continue to reign the skies and leave us without any sighting of the vacant sun. But luckily, one hour before the point of totality, the sky cleared and we had a marvellous view of this rare phenomenon. More information can be found in reference #1 below.

When I was a kid, my parents often told me about the total solar eclipse which occurred on 1954-06-30, when suddenly in the middle of the day the sky went pitch black and the birds stopped their usual singing. I was there but only passively participating from within my mother’s womb. 45 years later, our daughter was in the same spot, present but not actively so. References # 2 and #3 give more information about that eclipse.

The reason for all this talk about a total eclipse of the sun is that such a one will occur tomorrow in Indonesia, see reference #4 below. A band of eclipse hunters have headed there and let us hope that their travel is worth their while. Listen to the podcast of reference #5 below from one of them.

The travelers of flight Alaska Airlines 870 from Anchorage to Honolulu will receive a bonus on their flight when the departure time will be delayed so that they can intercept the eclipse en route, see reference #6 below.