Finally, the month of August is coming to an end. In Sweden it is called ‘rötmånad’, literally meaning ‘the rotten month’. The reason for that is the relatively high humidity at the end of Summer, which makes food susceptible to rapid deterioration. And in Brazil, the month is called ‘mês do cachorro louco’, i.e. ‘the month of the mad dog’, the month when the dogs wake up to life after Winter in a bad state of health.

But, apart from the terrible terror attacks, there have been some interesting highlights, such as the solar eclipse I wrote about on 2017-08-21. However, I would like to dream myself back to 40 years ago, when I first visited the USA during June, July, and August. We were 80 people from my university in Gothenburg who travelled there for a 2-months Summer job and with August off to travel around in this mighty country. Most of my colleagues preferred a 1-month air pass called “7 stops”, which permitted them to visit 7 different locations in one month.

However, I decided to make a different voyage. After my initial two months at Gould Inc. in Rolling Meadows, IL, I boarded the Continental Trailways bus and it took me to 28 different US states and Washington D.C., 2 Canadian provinces, as well as a sneak peak of Tijuana, Mexico. I have mostly good memories from that trip, but what still is imprinted in my mind is when, on 1977-08-16, while hanging around in Dave’s house at Hermosa Beach, CA, there was a breaking newscast on the radio. It started with the words “The King of Rock is dead!”. And when Dave and I gathered with his friends at the bar in the evening, everyone was soooo sad.

August, 1977, was also the month when NASA sent its Voyager 1 out into space. Besides all the scientific instruments aboard, it also included an optical disc with recordings of human talk, music, and pictures. Reference # 2 will lead you to a web portal that has all the information you might ever need about Voyager 1 and its sister ship, Voyager 2.

But of course I also remember Las Vegas, NV with its casinos; Flagstaff, AZ at the edge of the Grand Canyon; the ferry ride from Victoria, BC to Seattle, WA; Preservation Hall in New Orleans, LA; playing football in Central Park, NY and so many other joyful moments. 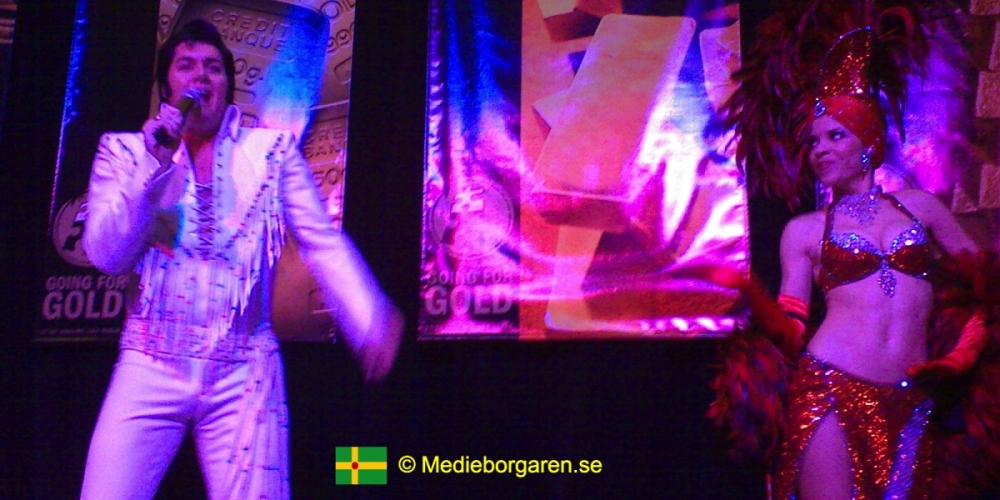 The King of Rock is for ever connected with Las Vegas, and that is where I took this photo. Unfortunately it is just a copy cat, and the photo was taken in Las Vegas on 2007-01-18. But the music really rocked!

As a tribute to the King, here is a photo of a copy cat performing in Las Vegas. But the video clip in reference # 1 is the real thing, ENJOY!