In the midst of the World Championships in football, which takes place in Russia, today is scheduled the game between Sweden and Germany. If we include the games played between the two countries when the biggest German nation was West Germany, this will be the 37th time the countries meet on the football ground, and the 7th time in official games, such as Olympic Games, World Championships or European Championships.

The last time Sweden beat Germany in an official game was in the World Cup 1958, held in Sweden. Tomorrow, we celebrate that exactly 60 years have gone since that game. For Swedes, it is a game to remember forever, not only because Sweden won the match and advanced to the final game, but also because of the marvellous goal made by the Swedish right wing player, Kurt Hamrin, in the last minute of the game. See reference # 1 for more about that World Cup and reference # 2 for a video clip of Hamrin’s feat. 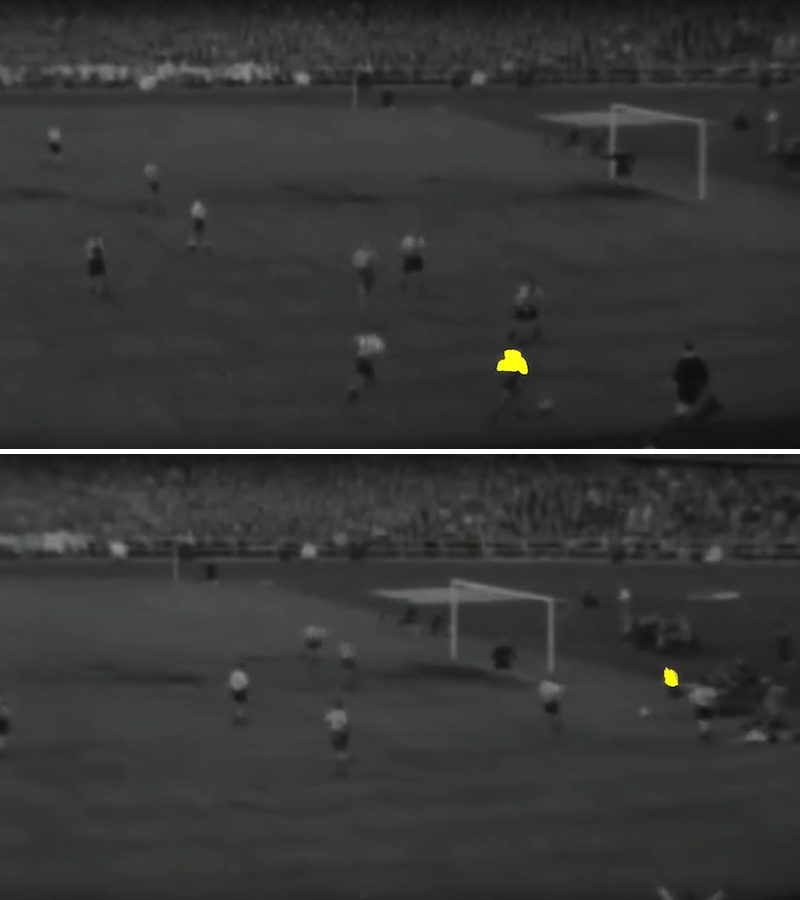 Two photos from Kurt Hamrin’s legendary slalom run against Germany in 1958, see the whole video sequence in reference # 2 below.

At the time of writing this post, the current leader in the chase for the Golden Boot, which is awarded to the player who scores most goals in the World Cup, is the Portuguese superstar Cristiano Ronaldo. Implicitly, he is also the main character in today’s photo. It was taken on 2017-06-07 in the Latvian capital of Riga and shows football fans waiting outside Hotel Radisson Blu Latvija to catch a glimpse (and an autograph?) of the Portuguese squad, and of Ronaldo in particular. Thus the number of fans using shirt # 7! (Two days later, in a qualifying match for the 2018 World Cup, Portugal beat Latvia with 3-0, with two goals scored by Cristiano Ronaldo. More about that game can be found in reference #3 below.)

Football fans outside Hotel Radisson Blu Latvija in Riga waiting to get a glimpse of the Portuguese squad, in particular jersey # 7, the superstar Cristiano Ronaldo, thus the multitude of fans wearing that shirt. This photo was taken on 2017-06-07, two days before the World Cup qualification game Latvia vs Portugal two days later. The result of the match was no surprise, Portugal won by 3-0, Ronaldo made two goals.

But since we are in Latvia now, we should remember that the three Baltic states (Estonia, Latvia, and Lithuania) are celebrating their 100 years of the first independent from Russia, which happened at the end of World War I, in 1917-1918, just like Finland, see my post of 2017-12-06. If you became interested in knowing more about the Baltic states, see reference # 4 below. Reference # 5 is an interesting article from the Finnish Broadcasting Co. (in Swedish) about the activities there during this year of celebration.

That’s what I learned in school !