In a world with so much violence, crimes and frauds, one could expect that at least sport competitions would give us some time to recover our senses and enjoy them.

But unfortunately, there is so much mischief going on also in sports, that it further adds on to all the other stress items we have to endure.

This morning, I read in Folha de S. Paulo, see reference #1 below, that the government of the State of São Paulo, for safety reasons, will not permit that the supporters of the away team in the matches among the teams from the capital, the so-called “classical matches”, be present in the stadium. The drop that made the bottle flow over was the violence last Sunday, in connection with the match between Palmeiras and Corinthians. A person waiting for his bus home at a bus stop was shot and died. He had nothing to do with the fighting supporters, just happened to be “at the wrong place at the wrong time”.

In Sweden, the premium football league, named “Allsvenskan” started the 2016 season last Sunday. The public attendence was good, even higher than the icehockey games of Swedish Hockey League, but there is one thing that I find most distressing in relation to the so-called “supporters” who find more pleasure in lighting artifical fires, “Bengal fires” on the grandstands, instead of concentrating themselves on the game. How about arranging separate competitions between Bengal supporters instead, who can create the finest, multi-coloured, smoky fires, so that real football fans can watch their game without the incendiary disturbance? If you are literate in Swedish, listen also to the interview in reference # 2, where the police give their negative opinion about this practice. 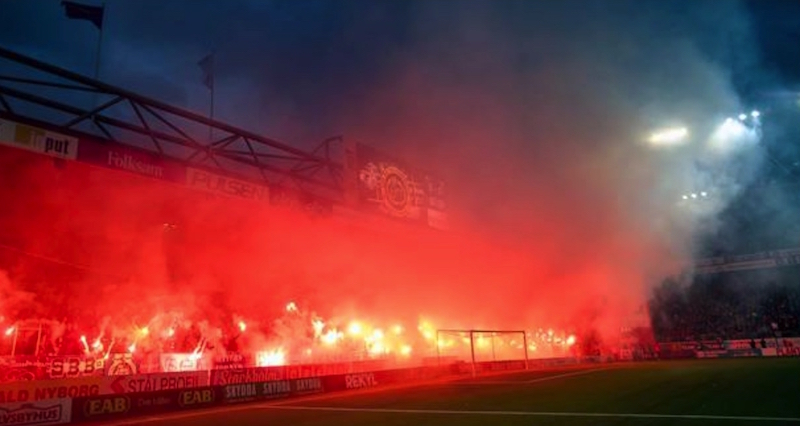 Supporters from IFK Göteborg “enjoying” their Bengal fires, in an earlier game against IF Elfsborg. Photo by Björn Larsson Rosvall / TT